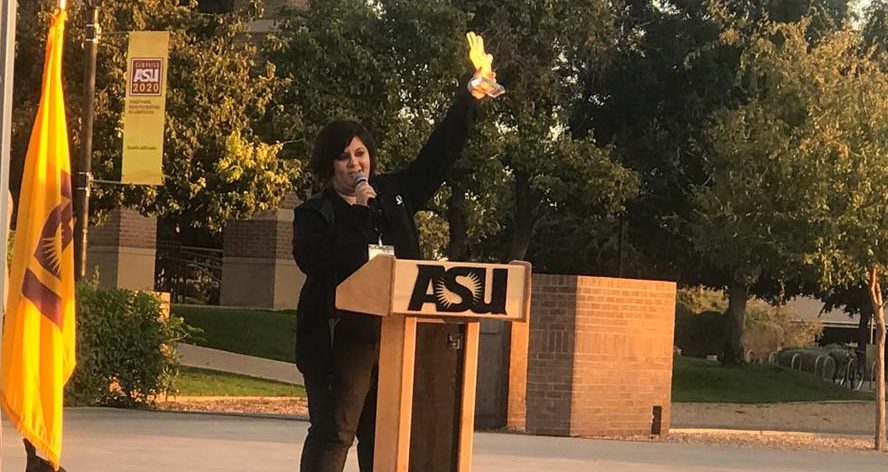 Our story began in 2016, when our founder & CEO, Michelle DiMuria became a mental health advocate. Inspired to help others, Michelle began planning her first mental health event. Nervous and excited all at the same time, Michelle knew she wanted this event not only to be successful but to help as many people as she possibly could.

Launching her mental health awareness week in October 2016, the event was a success. With over 120 attendees and 20+ vendors, Michelle knew she was off to a good start. But this was just the beginning, she had her heart set on creating a foundation for college students and mental health. Little did she know, she would be creating it sooner than later.

2017, was the year that changed everything for her! It was the year her life changed in more ways than one. For starters, Michelle was nominated for a pitchfork award at Arizona State University. In fact, her 2016 Mental Health Awareness Week was nominated for Best Educational Program. Happy to announce, Michelle won for the best educational program!

Ecstatic in more ways than one, she shared her victory with those closest to her. May was a different story, without going into touch much detail, it was the month Michelle remembered what had happened to her when she was sexually assaulted. It wasn’t long before she started seeing a counselor.

At the time, Michelle was working on the next mental health event. Creating the “Pave the Way: Mental Health Summit,” an event dedicated to providing knowledge and empowering those about the importance of mental health. Educating our community (both on and off campus) by providing various resources from local organizations across the valley. We know how difficult it can be to ask for help. Our goal is to provide a safe and comfortable environment for those who are interested in learning more.

Our purpose is to unite the community by bringing awareness to various stigmas and stereotypes that surround Mental Health. Remember, you don’t have to battle mental illness yourself, you can help someone who needs support! Join us as we learn more about this powerful topic and support our community. Keeping her mind distracted with everything going on, she put on foot in front of the other and began structuring the summit. It was a good distraction for the time being. Focusing on school and the event, Michelle hid behind the masks. She didn’t want anyone to know just how afraid she was. Always putting on a brave face, it was part of her defensive mechanism.

October finally rolled around, Michelle was working on last minute details for the summit. The date was slowly approaching, and she wanted everything to be “perfect!” In October, Michelle learned she had Post-Traumatic Stress Disorder (PTSD). Her mind began to wonder, she didn’t know how she was going to cope with her new illness and host the summit. “Dusting” herself off, she knew what she had to do. Hiding behind her mask, she went out with a smile and hosted the summit that November. With over 700 people in attendance and 50+ vendors, Michelle knew she had created something special. She couldn’t wait for the next one.

Shortly after the summit was over, Michelle began to self-disclose, sharing with others that she had PTSD. Some were very supportive while others began to look at her different. It made her both angry and frustrated, at times, it broke her heart. She knew this was the perfect time to create her foundation.

Working with her co-founders, they began to envision what the foundation would look like. A foundation for the college community and mental health. She knew it was going to be a huge task to take on, but she was ready! She had the support and a group of incredible people behind her. Taking a deep breath, she walked into 2018, knowing this would be her year to launch her foundation.

In March of 2018, Michelle applied for Venture Devil’s through ASU’s entrepreneur and innovation program. Getting accepted into the program, she was well on her way. Working Working with her lawyer, they began the next phase, thinking of a name. What felt like an eternity, in April 2018, Michelle finally came up with a name…BEE Daring Foundation!

Getting the approval of all those involved, it was time to submit the paperwork to the Arizona Corporation Commission. She filed the paperwork in May and patiently waited for their approval. On June 26, 2018, the BEE Daring Foundation was officially legal in the state of Arizona!

The BEE University Blog is Currently Sponsored By:

Sign up to receive updates, promotions, and sneak peaks of upcoming products. Plus 20% off your next order.